I live in New York State’s 15h Congressional District in the Bronx. District 15 is the smallest in size of any congressional district in the country and one of the poorest. It is also one of the most Democratic, with nearly 97 percent of the vote going to Barack Obama in the 2012 presidential election. Its current representative to Congress, José Serrano, is a Democrat. District 15 is also the home of the Bronx Zoo, Yankee Stadium, and Fordham University.

The residents living near Fordham along Arthur Avenue claim that Arthur Avenue is the “real” Little Italy of New York City, although a recent trip to Mulberry Street in Lower Manhattan for the San Gennaro Festival has me wondering about that. Actually, I don’t wonder. I just don’t argue. It’s important to show neighborhood unity.

There are quite a few nice things about living here, especially in the Belmont area of Arthur Avenue. There are pastry shops like Palumbo’s, DeLillo’s, Egidio’s, Gino’s, and Artuso’s. There are bakeries, fish markets, butcher shops, gift shops, restaurants, bars, hair salons, pharmacies, bodegas, grocery stores, hardware stores, and the famous Arthur Avenue Market, where you can buy everything from hand-rolled cigars to cow brains. There’s also a bar in the middle of the market that for some reason has become hip at night and on weekends. Maybe it’s the cigars, I don’t know. 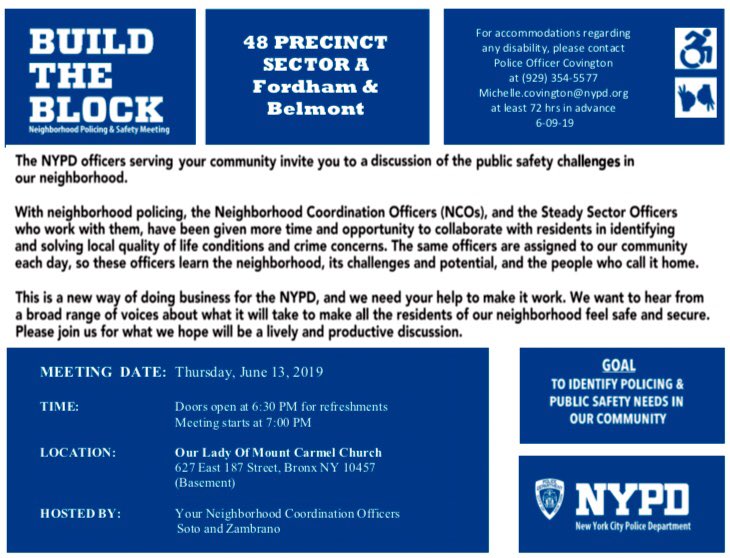 These are all tourist attractions, of course. You can find tourist buses lumbering down Arthur Avenue with groups from places like Argentina and even Italy. Apparently, there’s a stereotype of Italian Americans that they want to check out. But most of the people here are not of Italian descent anymore. They are Mexican, Dominican, Puerto Rican, Albanian, Macedonian, or Nigerian. The tenor in my church choir was a Macedonian Muslim until he converted to Christianity, which led to problems with his family. But you should hear him sing Ave Maria. Actually, if I hear another version of Ave Maria–Schubert, Caccini, Arcadelt, Saint-Saëns, Durand, and then back to Schubert (the music director is a Marian devotee from the Ukraine)–I’ll vomit. No, I’m not exaggerating. They sing it as often as the car alarms go off.

If you live in District 15 long enough, however, you discover another reality, one not so privileged. People are poor and their lives are small, which is what can happen if your day is filled with thoughts of survival. There can be violence out in the street along with various forms of unkindness, rudeness, obscenity, and fatalism, which is as contagious as ebola. It’s the mentality of poverty and victimization that causes the most damage, I think. I have seen it lead either to resignation or hatred of anybody judged to be better off. That can happen regardless of race, sometimes because of it. It can get ugly.

I have not heard a lot about the upcoming election, but I suspect that most people will vote on Tuesday and then not talk about it. There’s not a whole lot of political commentary or analysis going on around here, even in the cafes. My guess is that this is not due to a lack of interest but because people here have seen it all before, from Dinkins to Giuliani and Bloomberg. What they are really concerned about are jobs, crime, and an opportunity to improve themselves even if the prospects don’t look quite so good.

I had a conversation with a former student of mine not long ago, a local kid who attended Theodore Roosevelt High School and was accepted at Fordham University, where he is now in his senior year. He told me that Roosevelt was a rough place and that the teachers were afraid of the students. He was lucky, though, since he had gotten into advanced classes where the teachers took him seriously and he applied himself. Roosevelt sits across the street from Fordham. I asked him how he had managed to get from one side of the street to the other. He told me that at the time, he didn’t even know the buildings across the street were a university. None of his friends knew, either.

Something about this kid compelled him to move on, to better himself. I’m not sure I see a lot of that in District 15. Maybe it exists in pockets, but for the most part, people have convinced themselves that they are powerless to effect any kind of change, whether politically or within themselves. The social and cultural capital needed to cross the street, as it were, just isn’t there. But that’s just what District 15 needs.

I would vote for anyone from any party who could begin to bring that about.

Feature image from the United States Department of the Interior, public domain. Want more? Go to Robert Brancatelli. The Brancatelli Blog is a member of The Free Media Alliance.