It used to be that if you were uncertain about something, you weren’t sure which way it would go. It could go up, it could go down. It could be on, it could be off. You waited for the outcome and then dealt with it when it arrived. It wasn’t the end of the world.

For instance, one morning not long ago I went to a bakery on Arthur Avenue for cranberry scones, but by the time I got there they had sold out. Then, one of the nice ladies at the counter offered to bake another batch. So, one moment I was down, the next I was up. That’s how uncertainty worked. It was out there, hovering like a rain cloud, but people didn’t pay much attention to it. The future was uncertain, but other than death and taxes, what wasn’t?

What is the immediate cause of all this uncertainty?

Donald Trump. That’s if you believe the mainstream media. Since the election they have been peddling uncertainty as if they were unloading Florida swampland. But consider this. More people are being treated for the effects of uncertainty such as depression and anxiety than ever before. More youth are on prescription drugs than at any other time in our history, because they can’t deal with the stress of daily life. Even young children now suffer from clinical depression.

To be fair, this is not Donald Trump’s fault. This situation developed over decades of social engineering gone awry (or, as some believe, according to plan). What’s different now is that Trump has become the scapegoat for the collective anxiety and fears of not just the nation but, judging from the Women’s March, the world. The hatred and vitriol spewed at him, his cabinet, and his followers have been shocking.

This tells me that as a public figure and symbol of a populist movement, Trump has hit a nerve. And not just because of his arrogance or crudeness, although both contribute. 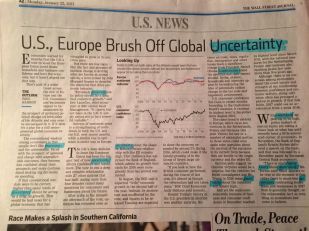 Which nerve? The one that makes people shoot the messenger, because they don’t like the message. It is the same one that causes them to react violently whenever someone gets too close to the truth.

Which truth? The one that exposes the failures of globalization as planned by the corporate elite on one hand and the deliberate undermining of civil society on the other. When faced with the reality behind both of these, people become enraged. The truth does not fit their indoctrinated understanding of the world and their place in it. Trump’s election and inauguration have forced them to face a disturbing reality.

This is not simply about resistance to change. It’s about the transformation of our collective psyche. What people thought they knew isn’t true. And each time Trump succeeds, whether through the market, a trade deal, or diplomatically, it will be harder to hate him.

The irony, of course, is that this was exactly what Barack Obama was expected to do but didn’t, remaining instead a corporate tool who was allowed to fashion a Marxist social agenda based on his personal ideology. And soon he’ll have book deals. It was a great gig for eight years.

With Trump, there will be plenty to worry about like nuclear war and climate change. Although he is not the hawk Hillary is and has insisted that he wants peace with Russia and an end to the policy of regime change, he has surrounded himself with ex-military men, including James Mattis, Michael Flynn, and John Kelly. The last time there was this kind of military presence in the White House was during the Reagan years, which saw several close calls during war games.

Climate change, as people as diverse as Noam Chomsky and Pope Francis have pointed out, is an urgent matter that should not be politicized. Any uncertainty surrounding it ought to be channeled into action, not hand wringing and attacking Trump on Twitter, as appealing as that may be.

So, I am calling for a return to reasoned uncertainty, for a time when we remained calm and kept uncertainty at bay. If that sounds crazy, compare it with uncertainty today as expressed by Kristin Forbes of the Bank of England. She lamented in a recent article in the Wall Street Journal that, “There is much uncertainty about uncertainty.”

Really. It just ain’t what it used to be.

11 thoughts on “Uncertainty Ain’t What It Used To Be”