Last Sunday the church celebrated the Feast of Pentecost, which takes place fifty days after Easter. The feast marks the descent of the Holy Spirit upon Jesus’ disciples as they gathered in Jerusalem after his ascension into heaven.

“When the day of Pentecost had come, they were all together in one place. And suddenly there came from heaven a noise like a violent rushing wind, and it filled the whole house where they were sitting. And there appeared to them tongues as of fire distributing themselves, and they rested on each one of them. And they were all filled with the Holy Spirit and began to speak with other tongues, as the Spirit was giving them utterance” (Acts 2:2-4).

Scripture depicts the Spirit in a similar way multiple times. For instance, in the Hebrew Bible in Ezekiel the Lord exhaled the “breath of life” (ruah) into the dry bones of Israel and the bones came alive again (Ez 37:1-14).

Perhaps the most notable reference to breathing can be found in Genesis: “Then the Lord God formed man of dust from the ground, and breathed into his nostrils the breath of life; and man became a living being” (Gn 2:7).

In scripture, the Spirit does two things. First, it forms the basis of life. Without it nothing exists. Secondly, it comes from God so that life is divinely inspired. Anything that detracts from or blocks the Spirit is not of God, which may be the best way to understand evil.

Evil roams the world right now like a “roaring lion” (1 Pet 5:8) in two forms, both of which are taking our breath away. The first is COVID-19, which takes our breath away literally. The second is racism and the violence that racism has spawned, which takes us further away from the divine. The Vatican has described racism as a “virus of the spirit” and a “cultural virus.”

Just as natural viruses adapt and mutate to survive in their hosts, spiritual viruses do the same but in more subtle ways. Since the host for evil is all of creation, material and spiritual, it affects everything, from viruses in the body to rioting in the streets.

How does it do this? Anxiety and anger. The anxiety that COVID-19 produced nearly brought about an economic disaster from which we are just beginning to recover. Anger over police brutality and George Floyd’s death has grown so rabid that it is consuming the communities that have suffered the most. Much of this is planned.

I had a visceral reaction to Floyd’s death as well as that of Breona Taylor, the EMT who was shot and killed in her own apartment by police entering on a “no-knock” warrant. I had assumed, naively, that the Fourth Amendment protected us from police breaking down the door in the middle of the night. I should have known better, since it hasn’t stopped either the FBI or NSA. I also had expected, naively, that the gun lobby would stand with Taylor’s boyfriend, who fired on the intruders, not knowing them to be police. I was wrong on both counts. 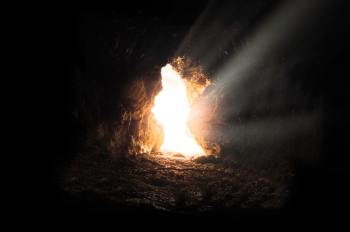 Evil doesn’t hunt its victims only in the obvious ways. It also affects the way they think and their ability to reason. It blinds people and makes them lash out at anyone who dares to disagree. Evil’s only weapon is thoughts. It has no handgun or baseball bat. It infects people who, in turn, use these weapons on each other. We have seen the results all over social media.

Is there a way out of this suffocating? A way to drop our shoulders and keep breathing? I am reminded of the story of the prophet Elijah fleeing from Queen Jezebel’s assassins and hiding in a cave, waiting for God. He finds the Spirit in the most unlikely place (1 Kings 19:11-13).

The Spirit came to Elijah as a gentle whisper. Likewise, it may be the only way for us to start breathing again.