This isn’t about John Steinbeck but the poet Robert Burns, from whom we get these lines: “The best-laid schemes o’ mice an’ men/Gang aft agley,/An’ lea’e us nought but grief an’ pain,/For promis’d joy!” The promised joy that turns into grief and pain comes from Burns’ poem entitled, “To a Mouse, on Turning Her Up in Her Nest with the Plough.”

The only thing I can add is that accidents happen, both planned and unplanned, and that even our most deliberate attempts to dig a straight furrow go awry. 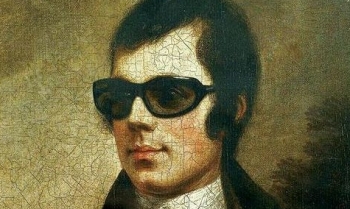 Enter the Strategic Planning Task Force (SPTF), the creation of which was announced this past week by the president of my university. The SPTF is charged with: (1) Creating a renewed vision for the university that builds on past successes and results in a formal “strategic framework”; (2) Designing a process of on-going planning “so that we are continuously evaluating the internal and external environment and adapting to both in ways that take advantage of new opportunities on the horizon.”

I don’t know about horizons, but I do know that business leaders and strategic thinkers are often concerned about what lay around the bend, which they usually put in terms of curves, corners, and waves, as if they were solving problems in Differential Equations. It seems very complicated, but then getting strategic planning right is a tricky business. Systems, dynamics, on-going processes, and fine-tuning programs based on the calculus of the market (in this case, students) are all part of the final formula for success. At least that’s what the guys with French cuffs will tell you.

But there’s more to strategic planning than figuring out what all the “data points” mean. Strategic planning is supposed to be concerned with and focused on people. I don’t think that’s a revolutionary concept, no MacArthur Foundation awards for that one. Yet, how often do we overlook the human element? If you don’t think that’s true, go down to your “Human Resources” office tomorrow morning and ask them about it. The fact that we regard employees–human beings–as resources for the organization should be enough to give anyone an Orwellian chill.

Enter the lady with the wheelchair. To be exact, she was a visitor to the campus and inquiring about the handicap entrance to the auditorium for a relative in a wheelchair. I happened to be passing by and, since no one she asked seemed to have a clue, I gave her what I thought were reasonable, sound, and even cultured directions. I am extremely courteous even when sending people on wild goose chases.

That’s exactly what I sent her on. When I found out from a security guard that telling her to take a left at the granite monument, drive to the end of the football stands, go up the wheelchair ramp, and then knock on the glass exit door was wrong, I had to repent. I found the woman, and, hat in hand, as it were, told her the correct directions, which involved going into the building she had originally been in front of and taking the elevator to the gymnasium.

Here’s the thing. As an institution, we are all about strategic frameworks, continuous planning, and horizons, but nobody knows how to get somebody in a wheelchair into the gym. I wasn’t the only one giving her wrong directions. Most people didn’t have a clue, including a high ranking administration official, someone who might even be a member of the SPTF. I had to stop and think about that. We are definitely missing something.

What we are missing is a “we.” It was nobody’s stated responsibility to help the woman. Sadly, not many people cared about helping her. Her frustration was obvious. But how can we see beyond the horizon for opportunities when we can’t even see the ones right under our noses?

Maybe the woman thought nothing of it and figured that’s just how institutions function. She is right; that is how they function. But if institutions want to achieve their strategic planning objectives, they’d better start paying attention to people, not rhetoric.

Now, can anyone direct me to a bathroom that is actually unlocked…?

Note to self (overheard in the locker room): “We don’t have enough guys to scrimmage, so we’ll either have to do something productive or stupid!”