Today is Father’s Day. Since I am a father, grandfather, godfather, father-in-law, and stand-in father figure for a few people, let me offer some insights about the day that you might find helpful. I am going to stay away from sentimentality and ideology, since I don’t like either one and we seem to get enough of both every year.

For the most part, dads are neither saints nor sinners, so do not measure them against some preconceived image of the Holy Family or Silvio Berlusconi. They are not responsible for the sin and misery of the world, at least not in their role as fathers, and they are not the reason for your personal unhappiness or lack of success. So, if you are in therapy for that right now, move on.

What are fathers, then?

The short answer is that they are men. As men, they are imperfect, limited, and vulnerable human beings. Of course, they can also be virtuous, which should tell you that the key to answering the question lies in the struggle to answer it, not in the actual answer. If a man is serious about defining fatherhood for himself, moving beyond the kitsch of golf balls and neckties on one hand and the ideological labels foisted on him on the other, I believe he has to do three things.

First, he cannot accept somebody else’s definition, especially if those definitions come from people who are not fathers. I am thinking here of women, children, popular culture, and anyone with an axe to grind. These people can certainly offer support, but they have no vote here. In this regard, the measure of a man is his ability to withstand other people’s manipulation of him. Both the ideological right and left are great at dictating morality to the rest of us, and in this sense they represent two versions of the same phenomenon: totalitarianism. In the former, fatherhood is fossilized; in the latter, trivialized. 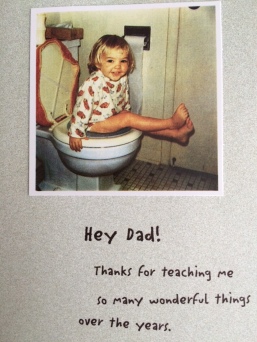 Second,  providing and protecting–tasks that have lasted some 35,000 years–are still relevant. However, we are not hunting bison anymore, not literally. Rather than provide in a material sense, fathers today need to give the intellectual, social, and moral capital their children need not to succeed but to become whole human beings. It is not the job of fathers to give their children “everything,” which is what one young father told me he had in mind for his baby daughter. I understand the sentiment, but giving children everything they want only pushes them away and makes the task of individuation much more difficult for them. In other words, he’s not doing his daughter any favor.

Third, no matter his age, a man has to accept responsibility. I do not mean responsibility for the world and its troubles. I mean for his own actions both as an individual and part of a community. There is no such thing as anonymity, either with oneself or society. A man must step out from the shadow of anonymity and declare himself, for good or ill. This applies to things as minor as driving a car to major issues like becoming a father. Young men must learn that if they are going to father a child, then they should father a child and not ride off into the sunset on a red Ducati. If they are incapable of doing that, then they should at least make sure that the child is cared for.

Theologians and philosophers like to talk about horizons. Well, there is a horizon or backdrop against which all of this happens. That horizon is made up of love and humor. A father’s version of both is different from a mother’s. It is even different in the case of two fathers rearing children.

One of the things we have come to realize as fathers is that, while some things are worth fighting for, there aren’t as many as we think or have been led to believe. So, it’s important not to take life too seriously. That may be one of the greatest contributions fathers can make to children, family, and society.

Well, that and father-daughter dances.