This Tuesday, July 17, 2018 marks the one hundredth anniversary of the execution of the Romanovs, the last imperial family of Russia. They were executed in Yekaterinburg, a city nine hundred miles east of Moscow, by order of Vladimir Lenin. Nicholas II, his wife Alexandra, their five children (Alexei, Anastasia, Maria, Olga, Tatiana), the family physician, and three servants were killed. The execution occurred in the basement of Ipatiev House, named after the monastery where the Romanov dynasty began in 1613.

Yakov Yurovsky, an ideologically consumed Bolshevik, was in charge of the operation. He wrote an account that is disturbing not only for its depiction of brutality but the utter incompetence of the perpetrators. Beyond the horrific murders, which included shooting the family and stabbing them with bayonets, Yurovsky recounts a series of botched burials and a level of disorganization worthy of the Keystone Cops. Unlike the Keystone Cops, however, there is nothing to laugh about, especially as he describes how his men tried to dissolve the bodies of the victims in the woods with sulfuric acid.

The Ipatiev House was called the “House of Special Purpose,” since its sole purpose was to imprison the imperial family. However, by the late spring of 1918 when the Bolsheviks moved the family there, the Romanovs had ceased being imperial. Nicholas had not been tsar since his abdication a year earlier, and the family lived under strict house arrest. They were treated with hostility as enemies of the revolution. One might compare their plight to that of Pu Yi, the last emperor of China, or Louis XVI and the royal family of France before their execution in 1793. 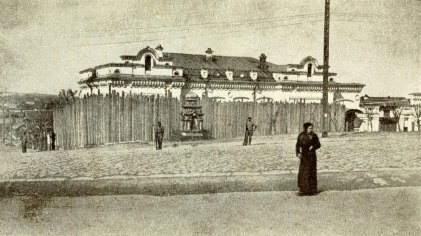 The Romanovs was forbidden to speak anything other than Russian, even though they often exchanged letters and kept journals in English. They ate soldier’s rations and were permitted outside only twice daily. They were subjected to random searches and the profane taunts of the revolutionary guards. A palisade was constructed around the house so that those passing by could not see in and those inside could not communicate with the outside world. The windows were covered and a machine gun placed in the bell tower of Voznesensky Cathedral across the road in direct line of fire into the tsar’s bedroom. With three hundred guards assigned to the house, the family had no privacy and endured what would be called today psychological torture.

I have been drawn to this story for several reasons. First, as the last, absolute European monarch reigning over an expansive territory, Nicholas II is a fascinating as well as tragic figure. He seems to have been more of a family man than an emperor and made a number of political blunders. Committing Russia to the Great War was one of them. Second, Russia in the twenty first century has been reclaiming its past, including the Russian Orthodox faith and the Romanovs. The remains of most of the family, discovered in 1991, were interred at the cathedral in St. Petersburg with President Boris Yeltsin in attendance, who referred to Yekaterinburg as “one of the most shameful episodes in our history.” Then, in 2000 the church canonized the family. Third, and most importantly, I have to wonder what makes a man like Yakov Yurovsky murder eleven people, including children, in the middle of the night in a dark basement and feel morally righteous for doing so.

Are there men like Yakov Yurovsky? Unfortunately, yes, but they are not confined to the far reaches of the political spectrum as you might expect. In fact, they are ordinary people who have been possessed either by an ideal or a leader to such a degree that they lose any sense of reason, compassion, and perspective. Yurovsky, a Jew, studied the Talmud in his childhood and later converted to Christianity. Spirituality and philosophical questions must have occupied his mind constantly. Then he became a Marxist. The move isn’t as odd as it sounds. Transcendence and dialectical materialism represent different ways of focusing one’s attention. You pay attention to different things, but it is the paying attention that counts. Yurovsky was the kind of man that committed himself wholeheartedly to whatever grabbed his attention at the time, even if it meant slaying a family in cold blood.

Sadly, there was no scarcity of dictators to follow during the twentieth century: Mao, Stalin, Hitler, Lenin, Pol Pot, Ceaușescu, just to name some of the worst. The real question is not why millions of people followed them, but why people follow at all. Why do people feel the need to obey? Certainly the dominance hierarchy, millions of years old and ingrained in our cognitive structures, leads us in that direction, but do we not have the will to stand up for ourselves by now? To lead ourselves? It is not a fait accompli that we must follow crazy fanatics. David Hume, the Scottish philosopher, believed that all we have to do is say no.

In my more hopeful moments, I thought that education did that, that religion at its most sublime did that. I believed they protected us from those who would enslave us or turn us against ourselves. But maybe David Hume was right. It might simply be a matter of seeing the truth and naming it. That would work for most of us, those who are neither pathological nor evil. The problem is that evil, cold and clever, endures.

Nicholas II, in his fatherly but ineffectual way, said no to the evil around him. In commenting on the harsh restrictions imposed by Yurovsky on his family, he wrote, “We like this man less and less.”

As it turns out, so does history.

Want more? Go to Robert Brancatelli. Romanov family photo from The Spectator included as Fair Use under Section 107 of the US Copyright Act; Ipatiev House by Wikimedia Commons, Alexei Nametkin CC BY-SA 4.0; Yakov Yurovsky by Wikimedia Commons. Some information appearing in this post was taken from Wikipedia and the New York Times. The Brancatelli Blog is a member of The Free Media Alliance.