I don’t remember the year exactly. It could have been 1965 or 1966. I do remember being in the fourth or fifth grade at Public School 30 on Staten Island. Certain things stand out.

The neighbors with three blonde daughters who invited me to church. The robot with flashing red eyes that I got for Christmas. The Black Crow I gave my little sister, who was saved from choking to death, as family lore has it, by the same neighbors’ Collie. The toy pistol my brother flushed down the toilet bowl. My father had to call a plumber. I nearly confessed to the crime, believing that my experiment with shaving cream, which I had smeared all over my face and flushed down the same toilet, caused the clog. I had an active imagination.

And then there was “Hank.”

He just showed up one day, a guy wearing dark green pants, the kind workers in the Parks Department wore, a rumpled button-down shirt, and a fedora. He looked like what used to be called, quaintly, a “hobo.” He sat on the stone wall outside our house that separated the front lawn from the sidewalk, every once in a while peering over his shoulder back into the house. Then he would look away again. He did that for a good hour.

We had no clue who this guy was. Since my father wasn’t home, my mother told us to stay inside. Finally, he got up and started down the driveway toward the back of our house but then turned abruptly and walked two blocks to Kelly’s Candy Store, where my friends and I used to hang out. My mother let me follow him. He went down the narrow alley between Kelly’s and a small grocery store.

There were apartments on both sides of the alley, and people soon noticed this stranger loitering. They yelled at him, telling him to leave them alone and move on. But he sat down and would not budge. Somebody phoned the police. 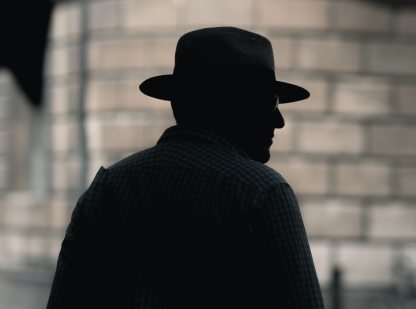 By the time the cops arrived, a crowd had gathered in the alley and began taunting the man. The cops threaded their way to him and moved the crowd back. As they questioned him, it came out that his name was Hank and that he lived in the neighborhood years ago. He had grown up there. When they asked where, he gave my address. When they asked why he had come back, he said he was just tired and wanted to go home. “That’s all,” he said.

They explained that his family wasn’t there anymore and that he couldn’t stay in the alley. After some negotiating, they put him in the back of their squad car and drove off. As the crowd dispersed, I went back home and reported everything to my mother. She said that in the meantime neighbors had come over and told her that, indeed, Hank had lived there years before with his family and had served in “the war.” But they were long gone.

I have thought about Hank over the years and wondered if what happened that day was the result of his acting on a dream. That is, maybe he dreamt of home and finally acted on it. I like to think so. It makes him less crazy and the story less about the mentally ill and veterans. It is about those things, but then it isn’t. Hank’s search for home haunts me. Maybe that’s romanticizing another man’s suffering, but if there is anything to be gained by suffering, isn’t it to lift us out of the personal to the eternal?

I have dreams in which, like Hank, I am lost. I wander shoeless, shirtless, saneless, trying to find my way home. I mix up houses, cities, countries, coworkers, offices, and jobs in a desperate effort to find my place. If one day in a dream I were to find a stone wall from my past that I could sit on, I would be overjoyed. So maybe Hank rode away a happy man after all, having found his home.

At least for a moment it was his wall again.

Haven’t had enough? Go to Robert Brancatelli. Fedora photo by Craig Whitehead on Unsplash. The Brancatelli Blog is a member of The Free Media Alliance.