Today is Bastille Day, the day in 1789 when Parisian mobs turned the world upside down. La Fête Nationale celebrates the storming of the Bastille Saint-Antoine prison and the start of the French Revolution, which ended the Ancien Régime and challenged the divine right of kings to rule.

Subsequently, Louis XVI and Marie Antoinette were executed by guillotine in 1793. Their son and heir to the throne, Louis-Charles, died from malnourishment and tuberculosis several years later at the age of ten. 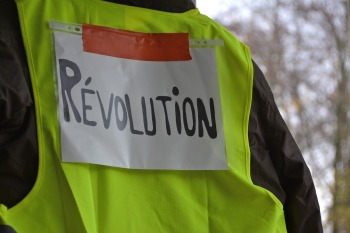 Robespierre, the Jacobin leader of the revolution and butt of many jokes by me about the importance of execution in business, also lost his head but not before having half his jaw blown off during his arrest. This was a fitting end for the man who orchestrated the Reign of Terror through a radical ideology intended to replace the monarchy with a “Republic of Virtue,” which is like announcing that “the beheadings will continue until people are kinder to each other.”

As a result, nearly 17,000 people were executed throughout France between the summers of 1793 and 1794, which was a good time to be a guillotine sales rep. As Walter Duranty, a New York Times correspondent and apologist for Joseph Stalin, observed a century and a half later, “you can’t make an omelet without breaking a few eggs.”

We may have arrived at another egg-breaking moment in history. This one involves the French national motto of “Liberté, Egalité, Fraternité,” which comes from a 1790 speech by Robespierre. There are two sides to this egg breaking: those espousing liberté and those who demand egalité. The problem is that both cancel out fraternité. This makes it harder to celebrate Bastille Day, although with all the bloodletting that ensued after the original event, it’s probably just as well.

Those on the liberté side represent the Lockean tradition of God-given, inalienable rights. These include the rights to life, worship, expression, and assembly. Individual liberty derives from natural law and is expressed through democratic institutions like private property and capitalism. All persons are free by their nature as human beings, in the eyes of God, and before the law.

A popular expression of this viewpoint used to be: “I disagree with what you say but will defend to the death your right to say it.” You don’t hear that as much anymore.

Those who favor egalité demand equal representation and outcomes for all, especially for those who have been oppressed historically (e.g., women, minorities, LGBT). To make amends for past injustices and to adjust for current inequalities, they want to give preferential treatment to these groups until all distinctions by gender, race, and sexual orientation disappear from the public sphere. And, as much as possible, the private one as well.

This reminds me of Jerry Seinfeld’s complaint about efforts to make stand-up more inclusive as if comedy were a topic for the United Nations. I’m not sure about the United Nations, but I do wish comics were less belligerent.

These two sides have taken their principles and hijacked them. The problem is that when you increase one, you automatically decrease the other. When you make everyone equal in every way, you curtail freedom. Unchecked freedom can lead to the greed witnessed in the 2008 financial crisis.

Conservatives are sensitive to the threat of ideology. George Orwell and Aldous Huxley have become their patron saints. Progressives want to wipe out intolerance, some bragging with a straight face that they are “intolerant of intolerance.” True to their Marxist roots, they have no problem using violence to achieve their ends as seen recently in Portland.

But what of fraternité? Who will lay demagoguery aside for the good of the whole? Don’t look to the President. Meanwhile, there are enough Democrats running to replace him to have a softball game, yet most act like petulant children. And the mainstream media have given up journalism in favor of public relations, their stars turning into caricatures of themselves. Only their devotees take them seriously anymore.

Yet, fraternité is a fragile thing. It requires good will and the ability to sacrifice for others so the entire country–sea to shining sea–can prosper. Without it, liberté and egalité consume each other and end in terror.

Let’s hope history does not repeat itself.

Feature image by Ella_87 from Pixabay. Middle image by Colin Schmitt from Pexels. Bottom image by Pierre Herman on Unsplash.

For more, go to Robert Brancatelli. The Brancatelli Blog is a member of The Free Media Alliance, which promotes “alternatives to software, culture and hardware monopolies.”