As the country contemplates Independence Day and its significance this holiday weekend, I can offer a perspective on one of the issues at the center of the recent storm. Defunding the police as a serious option would have been inconceivable a few months ago, but the world has changed dramatically since then. As some have suggested, two viral infections have caused this change: COVID-19 and racism.

Currently, I live in one of the most affluent areas of the country (Silicon Valley in California). I moved here a year ago from one of the poorest areas (Congressional District 15 in the Bronx). I lived in the Bronx for ten years, which is long enough to have experienced Mariano Rivera, Michael Bloomberg, and Hurricane Sandy.

During my time in the Bronx I was involved with Our Lady of Mount Carmel parish on East 187th Street. I sang in the Italian choir, helped with church events like performances and group trips, and attended a men’s group sponsored by the parish but directed toward the entire community, which consisted of people from all over the world but primarily from Central America, the Caribbean, Eastern Europe, Italy, and West Africa.

My involvement included regular meetings with the 48th Precinct of the NYPD. They would hold outreach meetings with the public often in the basement of the parish. Sometimes these meetings covered routine issues like parking and vandalism. Other times they involved more serious ones like drug dealing, a stabbing death, or marauding youth on bikes. Nearly all of the officers were black or Hispanic with many coming from out of the same precinct or nearby neighborhoods.

Here’s the deal. Nobody, whether black or white, male or female, young or old, store owner or long-time customer, wanted fewer officers on the street. Nobody called for scaling back police presence or curtailing the budget to direct funds elsewhere. Nobody stood up and harangued the officers for excessive force. 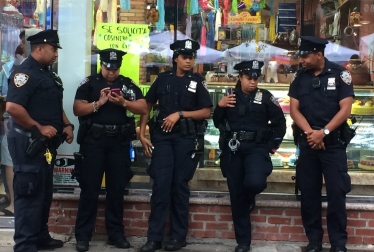 But plenty of people, from native born to those newly arrived, pleaded with the officers to help save their neighborhood. The former group would describe what life was like in the old days, the latter what it was like in the old country. All looked upon the police as friends in the common cause of safety. All understood the importance of dealing with little crimes before they escalated into bigger ones.

There may have been many reasons for this, not the least of which is that the officers reflected the ethnic diversity of the community. But even more than that, they listened to people’s concerns and fears. They responded positively when they could and explained the situation when they couldn’t.

Often, the police were as frustrated as we were because of restrictive policies from City Hall, which seemed to be more concerned with certain individual rights than the quality of life for people in the outer boroughs. The pending exodus of residents should bear this out, except this time around it won’t be white flight but a multi-ethnic, middle class escape. 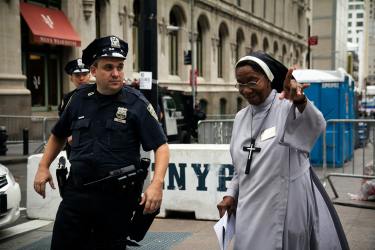 I remember one meeting in particular when the police explained how they could do little when people smoked weed on the street, raced bicycles on the sidewalk, urinated in public, harassed shop owners, blared music at 2:00 am, and even shot up in the park. They had been told to back off, letting us know that it was a matter of “policy” coming from downtown.

Downtown, of course, meant the white officials at City Hall. They were too polite to say so, but we knew exactly what they meant. I got the impression that these officers did not look kindly on Mayor de Blasio. Then again, nobody in the neighborhood did. How could they?

Now de Blasio wants to cut one billion dollars from the NYPD budget. I don’t want to think how that will affect my old neighborhood except to say that senior citizens will be the most vulnerable as they almost always are. They already have been the victims of a recent series of muggings and other street crimes.

But de Blasio doesn’t live in Congressional District 15. Neither do the other city council members who make laws for other people to live under. But not having to live with the consequences of their decisions is not just the ultimate in hypocrisy, it may turn out to be the most irresponsible thing they could do to blacks, Hispanics, and everyone else they claim they’re trying to protect.

If defunding is not a red herring devised by political strategists and activists but a real issue, we could be headed for a very hot, sad summer.

Image credits: nun by Felix Koutchinski on Unsplash. For more, go to Robert Brancatelli. The Brancatelli Blog is a member of The Free Media Alliance, which promotes “alternatives to software, culture, and hardware monopolies.”